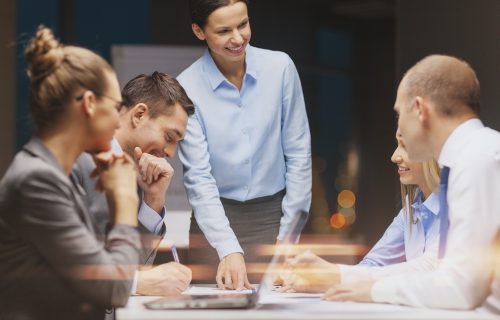 One of our biggest blind spots in our work performance is how we are perceived by others. Typically, there’s no way to know what the perception is, other than by directly asking and hoping for complete honesty. If you really want to know others’ perceptions in order to grow, learn and improve in your leadership, then work with a coach and complete a 360 assessment.

A 360 assessment is an online survey of questions about your performance and perceptions as a leader, which is sent to 10-15 people you’ve selected. A meaningful group would include your direct reports, your colleagues and leaders above you. The survey offers your participants confidentiality and the results are compiled and typically only shared with you, unless you choose otherwise.

Why would you want to know how you are perceived? First and foremost, your behavior sets the tone and example for others. Employees watch their leaders.  The behavior of the leader tells them what the culture is like and what behaviors are acceptable. It also projects what behaviors are expected, and what kind of leader you are. Why wouldn’t you want to know their perceptions?

So, what happens if there’s a perception that’s not accurate? Or at least it’s not what you intend to portray? That’s where you can use coaching and goal setting/. We use your 360 results to find those behaviors and perceptions that YOU want to change. We’ll develop goals for behavior change and reinforce the perceptions you WANT others to have.

Yes, perception is reality, but that doesn’t mean it can’t be changed if you want it to be different. In this video by Marshall Goldsmith, he talks about how to change behavior and change perception. He specifically points out the difficulty in changing perception, and outlines an effective coaching process. No kidding, changing perceptions is hard, and will take a lot of follow up. But if you are committed to a behavioral change, and follow up consistently, you’ll be seen as a better leader.

For example, one of my coaching clients received feedback that he interrupted people too much. This made his team members feel shut down and unimportant.  Of course that wasn’t his intention. He thought he’d understood their point fully and was moving into a solution or the next topic to save time. After the feedback, he set a goal to be more present during conversations. He developed a few visual reminders to use during conversations, and scheduled periodic reviews with one of his team members to track his progress. By asking for continuous feedback, his commitment was transparent, such that not only did his behavior change, but the perception as well.

The next blog in our 360 Series will address setting goals to enhance your leadership. Working with a coach and your 360 Assessment results will show you areas of needed focus and truly accelerate your leadership.