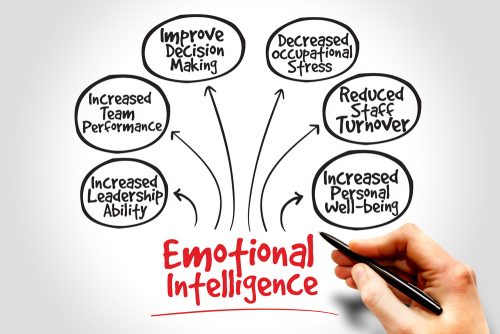 You’ve obviously heard the term emotional intelligence once or twice. Perhaps you’ve been told that you would benefit from having more of it.

The term “Emotional Intelligence” was created by Peter Salovey and John D. Mayer in 1990 as “a form of social intelligence that involves the ability to monitor one’s own and others’ feelings and emotions, to discriminate among them, and to use this information to guide one’s thinking and action”.

Why is emotional intelligence important in leadership? According to Rutgers psychologist Daniel Goleman who wrote in “What Makes a Leader,” in 1998:

“My research, along with other recent studies, clearly shows that emotional intelligence is the sine qua non of leadership. Without it, a person can have the best training in the world, an incisive, analytical mind, and an endless supply of smart ideas, but he still won’t make a great leader.”

Successful leaders were historically considered highly intelligent movers and shakers who made a lot of money along the way. They had an old-style of commanding the what, when, where, and how of getting things done, which has become fairly extinct. Most workers instead look to a leader who will show them a vision of success. Then, they work to bring that vision to fruition, utilizing their skills, desires, and initiative.  This performs wonderfully if we are all robots without emotions. But we’re not.

Emotional intelligence now steps into the frame. Leaders who understand the roles emotion plays in their own lives, and in the lives of their followers, are much more successful and maintain loyal teams. Successful leaders lay out the vision, supply the tools and resources necessary, and know feelings make a difference too. If a leader is in touch with his/her own emotions about situations, they can be more empathetic. Empathy then contributes to decision making and how your followers will feel. In general, people will always remember how you made them feel about something, rather than what you said or did. Feelings have been considered ‘soft’ in the past, but now have significant importance.

To put it simply, according to positivepsychology.com, the following are excellent examples of what emotional intelligence in the workplace looks like: